The design process varies from one person to the next,  for us it quite often varies from design to design.   There are no rules, there is no set path to follow.  When conceiving a design, we begin with an unadulterated idea.  Something very raw and often really off-the-wall.

We then take the idea and refine it into something pure and beautiful, something that a client will enjoy in their home every day. The chosen design that we take forward will have a quality of ‘understated chic’ about it.  As with all of our designs it will give a nod to fine texture and detailing.

Sometimes we have an idea that is so right it hits us out of the blue like a freight train. This tends to happen at an unusual time of day and generally when we’re not in the studio.  On these occasions we tend to scribble the idea down and/or mentally file it until the appropriate situation to look at it arises, although not every idea reaches fruition.

Fitzroy, as we now call it, was a train.  The stripe is derived from Sudbury so it has that classic Roger Oates handwriting.  It’s balanced; it looks good on stairs, it will look great as a rug.

Developing Fitzroy was a challenge. We needed it to look as fresh and young as it was when first envisioned. Every time we tried to refine the colours, the waters became muddied and we ended up looking at samples that were ‘nice’ but just weren’t as good as that first edit.

It was however important for us to make this journey.  It allowed us to come back to the original, uncomplicated idea without worrying that we were missing something. From this point we experimented with the scale.

For a long time we felt from a practical point of view it needed to be two repeats (the current pattern repeated twice across the 70cm width). Then a light-blub moment, we increased the scale and discovered the larger stripes worked with the designs striking colours.

So now it is complete. It is chic, it has texture and fine detailing. However, understated it absolutely is not. Fitzroy is bold, bright and dynamic.  It will make a statement wherever it is used.  Available in just two colour variations – we felt it needed no more.

Venetian flatweave Fitzroy is available from September 2014 in two (amazing) colours, Black or Bright. It is approx. 70cm wide.

It is ideal for anyone brave who knows stair carpets are not old fashioned. 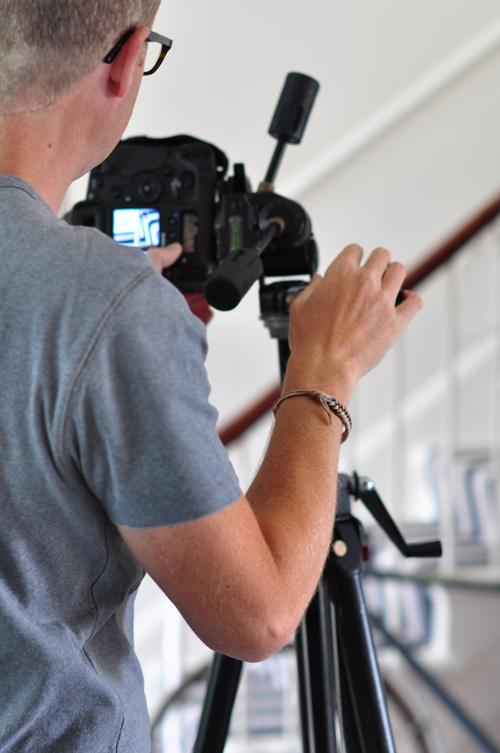 MAKING THE LONDON COLLECTION – PART ONE